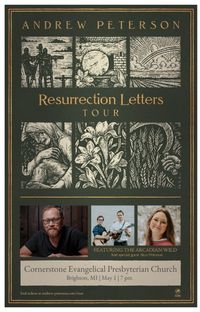 Join us May 1st, 2022 in Brighton, MI for Andrew Peterson's Resurrection Letters Tour!

For more than twenty years now, Andrew Peterson has been about the business of quietly changing lives in four-minute increments. In the city of Nashville where music is an industry in the same way fast food, generic greeting cards, and bumper stickers are industries, Peterson has forged his own path, refusing the artistic compromises that so often come with chasing album sales and radio singles and creating instead a long line of songs that ache with sorrow, joy and integrity, and that are, at the end of the day, part of a real, ongoing, human conversation. 2019, Andrew celebrated the 20th anniversary of his Behold the Lamb of God project with an anniversary tour and brand new album recording.

Andrew is also the award-winning author of The Wingfeather Saga, a four-book fantasy adventure series for young people, described as The Princess Bride meets The Lord of the Rings. The books are currently being produced as an animated film and will be re-released through Penguin Random House starting March 2020.

In October 2019, Peterson released his first non-fiction book, Adorning the Dark: Thoughts on Community, Calling, and the Mystery of Making, through B&H Publishers. Through stories from his own journey, Andrew shows how these principles are not merely helpful for writers and artists, but for anyone interested in imitating the way the Creator interacts with his creation. This book is both a memoir of Andrew’s journey and a handbook for artists, written in the hope that his story will provide encouragement to others stumbling along in pursuit of a calling to adorn the dark with the light of Christ.

In 2008, driven by a desire to cultivate a strong Christian arts community, Andrew founded a ministry called The Rabbit Room, which led to a yearly conference, countless concerts and symposiums, and Rabbit Room Press, which has published thirty books to date.

Andrew and his wife, Jamie, have been married for 24 years and have three children, Aedan, Asher, and Skye. In his spare time Andrew keeps bees, builds dry stack stone walls, gardens, draws, and sleeps.